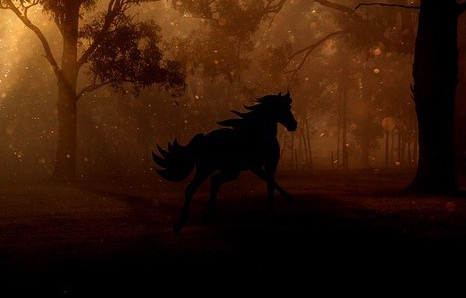 Depending on your point of view, seeing a Pooka could be good or bad luck. Generally considered to be pranksters, they don’t often do real harm. While they delight in terrifying humans, they have also been known to give advice to lead people away from harm.

The Pooka is a shape shifter, most commonly known to appear in the form of a horse, goat, wolf, fox, cat, rabbit, raven, goblin, or dog. They also take a human form, which may blend animal features, such as ears or a tail. No matter its form, the Pooka usually has dark hair or fur and golden eyes.

According to legend, the only human to ever ride a Pooka was Brian Boru, a high king of Ireland. It is said a special bridle incorporating hairs of the Pooka’s tail was constructed and allowed Brian Boru to mount the creature.

Some farming traditions include a portion of that year’s harvest is left in the field as the “Pooka’s share.” The intention is to appease the Pooka and ensure good harvests in the future.